Mutations in the MSH6 gene cause Lynch syndrome.

People with Lynch syndrome are also at an increased risk for other cancers that include cancer of the stomach, urinary tract, ovaries, small intestine, pancreas or bile ducts, sweat glands, and brain. 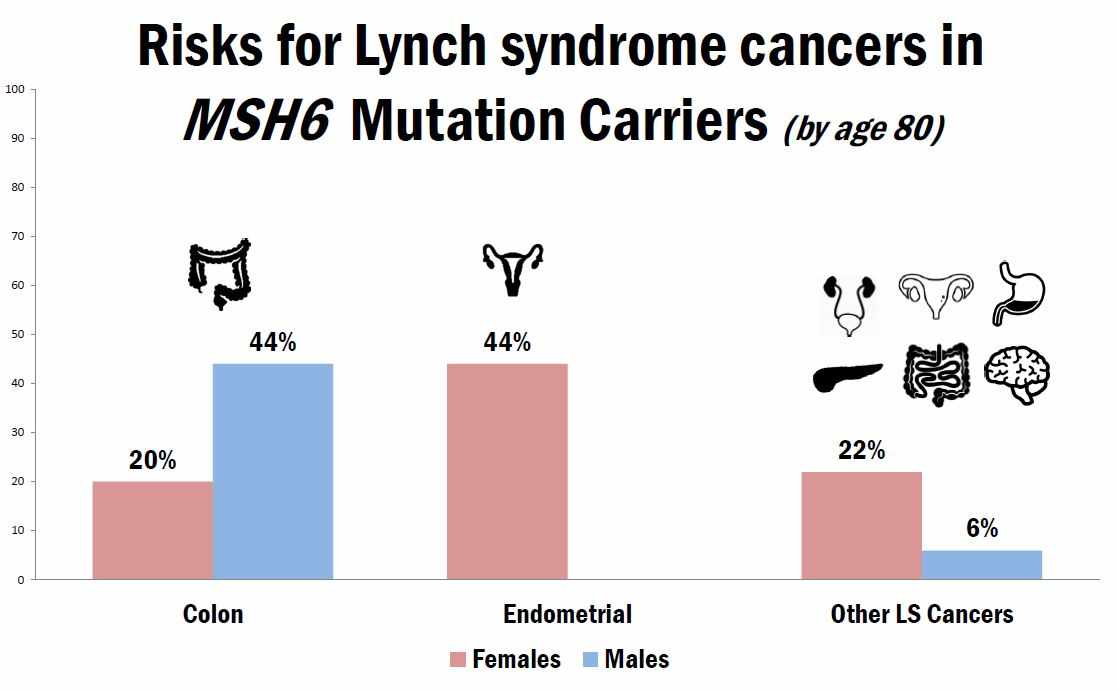 Several hundred mutations in the MSH6 gene that predispose carriers to colorectal, endometrial and other Lynch syndrome-associated cancers have been found. These mutations may cause the MSH6 gene to stop producing the normal protein, and to produce the wrong protein or no protein at all. When the MSH6 protein is absent or ineffective, the number of mistakes that are left unrepaired during cell division increases substantially. If the cells continue to divide, errors accumulate in DNA and the cells become unable to function properly and may form a tumor in the colon, endometrium or another part of the body.

Mutations in the MSH6 gene are inherited in an autosomal dominant pattern, meaning each first-degree relative, such as sibling or child, has a 50% chance of having inherited this mutation, and genetic testing is recommended for adult relatives.

Mutations in MSH6, when inherited from both parents, cause Constitutional Mismatch Repair Deficiency (CMMRD), a condition that usually presents in childhood and is associated with a high risk of cancer. If both partners have a MSH6 mutation, each child has a 25% chance of inheriting both mutations, which causes CMMRD. For this reason, anyone with an MSH6 mutation who may be having children should have his or her partner tested to see if he or she also carries an MSH6 mutation.

A Summary of Screening Based of of NCCN Guidelines:

Aspirin may decrease risk, but optimal dose and duration are uncertain. Talk to gastroenterologist for discussion of personal risks and benefits.